A Brief History of Rancho Guejito 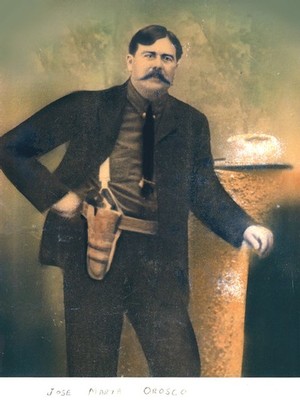 In 1845, California was not a part of the United States.  It was still a distant province of Mexico.  The property was a land grant to Orozco from Pio Pico, the Mexican Provincial Governor.

Pio Pico had handed out similar vast parcels to other friends and patrons. It was one of 800 so-called Mexican Land Grant ranches awarded during a romantic period of history known as the “Days of the Dons”. Orozco named the place Rancho Guejito.

Below: The original 1845 land grant from Mex. Gov. Pio Pico. 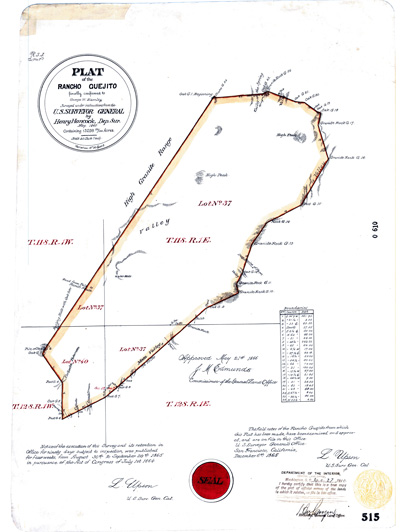 Untouched by time, the property has been described as a ranch “that cattlemen see only in their dreams” and a place “where the old west is alive and well.” A rancher who ran cattle on the site for decades declared, “This is where the asphalt ends and the Old West begins.” The ranch has grown over the years from its original historic size of 13,298 acres to approximately 23,000 (36 square miles). The largest single addition came in 1940 when the adjoining Maxcy Vineyard Ranch at 4,500 acres was annexed to Guejito. The most recent acquisition was the purchase of the equally historic 100-acre Rockwood Ranch in 2006. The Rockwood farmhouse, built in the early 1890's by Bernard B. Rockwood, is now the location for Rancho Guejito Vineyard's Tasting room.

Now in addition to the vineyards, the ranch is home to almost 2,000 grass-fed cattle and many hundreds of acres of citrus, avocados, and vineyards. Our goal is to continue to Ranch and Farm the land as it has been for almost 175 years.

The Maxcy Winery and homestead was built on the ranch in 1850 by Col. A.E. Maxcy and is said to be the oldest winery in this part of California. By 1852, he planted 1,500 acres in Muscat and Mission grapes, yielding 8-10 tons per acre. By the turn of the century, Maxcy was known as the leading producer of wine in Southern California.

Today, what remains of the Maxcy winery still stands on the property. Fire and the elements over the years have caused it to fall into further disrepair. Still, we admire the history and Maxcy's legacy of fine wine production in Southern California and hope to one day restore the building.

In cooler months, our Founder's Club members have an opportunity to experience a special tasting at the winery's location.

Our tasting room is located at the historic Rockwood Farmhouse in San Pasqual Valley.

It features beautiful, shaded gardens with scenic views looking out towards the expansive 23,000 acres of the rest of Rancho Guejito. Rockwood Ranch was one of the first farming settlements in the valley, purchased by Bernard B. Rockwood in 1885. Its location was chosen for the rich soil and the natural watershed of the land. Its legacy carries on today as growing grounds for not only many of our grapes, but our avocados, grapefruits, Cuties, and lemons.

To see the ranch and all of its breathtaking views and sites, join our Founders Club. As a Founders Club member, you will be invited to special tastings at select locations around the ranch throughout the year. Membership is limited.